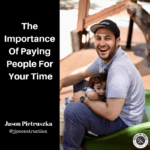 ﻿ Today’s featured guest is Jason Pietruszka from @jjpconstruction, a retired musician turned contractor. Jason learned how to run a business early on while he was young and still in the music industry. However, he quickly realized that his success will only be based on someone else’s output. So he decided to start on his own. His […]